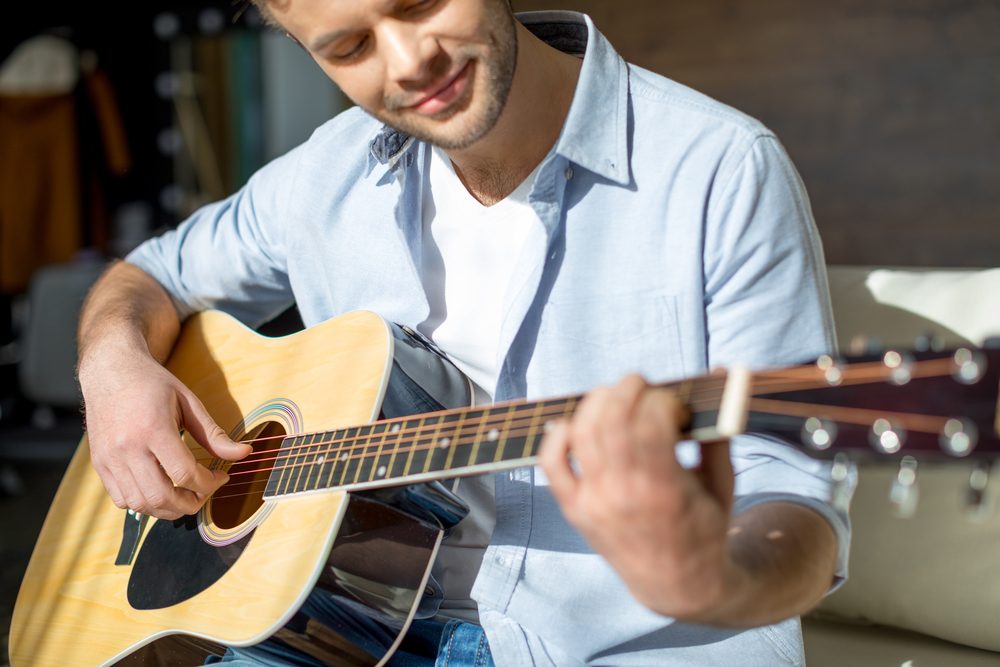 If you’re considering buying a guitar, finding the right one for the price can be difficult. Whether you want to learn how to play, or your old guitar bit the dust, you don’t have to spend an arm and a leg just to get a good, quality guitar. In my experience as a guitar instructor for several years, there are many acoustic guitars for under $300 that will work just as well as a $1000+ guitar.

The Yamaha FG830 is definitely an option to consider. Like the others in its class, this would work well for beginners and pros alike. Let’s dig into some of the details and features that make this guitar shine.

Yamaha has been building quality instruments for over 130 years, ever since the founder made his first organ. Since then they’ve built pianos, guitars, violins, and so much more.

One thing Yamaha strives for when making their instruments is building something of quality that doesn’t break the budget. This is especially true with their FG line of acoustic guitars, first introduced in 1966. Fifty years later, the FG-series is better than ever.

What Woods Are Used?

Tonewoods are special woods that guitar makers use to bring out the best and richest tones in the guitar. The Yamaha FG830 is made from two specific ones. For the top, Yamaha used Sitka Spruce, which is commonly used for guitar tops.

It’s found in the forests of Canada and Alaska, and is slightly harder than common spruce wood, which makes it tough and durable. But it’s still extremely flexible and brings out distinctive mid and low range sounds from the guitar.

The sides and back of the guitar are made from rosewood, which is a very porous and durable wood. It also carries a slight, sweet rose scent, which is what gives it its name. Brazilian rosewood used to be a favorite for those who made guitars until it became illegal to use it. So now all rosewood guitars, including the FG830, are made with Indian rosewood.

Although the Indian variety is slightly darker and coarser, it still carries the same qualities that make it a great tonewood choice for guitars. This unique and beautiful wood helps the guitar produce lovely warm and dark tones.

Why Is It Called a “Dreadnought Guitar”?

Dreadnought refers to the shape that the guitar was made in. Acoustic guitars come in various shapes for different purposes. The lighter, concert-style shape, for instance, is designed for touring on the road and performing in front of audiences.

And the Dreadnought did not disappoint. This shape, though larger than most acoustic guitars, delivers excellent performance and does well to balance the overall tone quality. Additionally, the low frequencies are deep and crystal clear. The sound it creates is also very loud and strong, making it a great choice for a lot of country or rock genres.

The only downside to the Dreadnought shape is that it the body is quite large. Those with shorter arms might have exceptional difficult, especially if trying to play while sitting down. If this is you, you might want to try looking for something that’s a bit smaller in design, like the Yamaha FS800.

Some people have found ways to adapt to the Dreadnought’s large size and play beautifully. Many even prefer this size to others because they enjoy the powerful sound they can create with it.

What Can You Expect from the Yamaha FG830 Acoustic Guitar?

Here is a quick glance at the specs of this guitar:

With the quality tonewoods and distinctive Dreadnought shape, you can expect an inexpensive guitar that looks and feels like you’re playing a $1000 guitar. If you love the deep, low tones, and loud “boomy” sound you’ll get from the Yamaha FG830, then you should add it to your list.

One issue I’ve found with this guitar, and this is supported by various reviews on Amazon, is that the action seems to be pretty high. What I mean by that is, the strings are too far away from the fretboard, making it difficult to hold the strings down when playing.

This is an easy fix, though, that any guitar shop can take care of for you. Or, if you have the skills, you can also find a tutorial online and do it yourself. Just be sure not to lower the action too much, as that can cause buzzing sounds along the fretboard that’ll interfere with your playing.

What Have Other Customers Said?

Despite the high action on this guitar, it has extremely high ratings, and everyone raves about how beautiful it both looks and sounds. No one believes they got it for less than $300, because with the quality design and rich sounds, it looks and feels like an expensive guitar.

Several customers have left reviews on Amazon comparing the Yamaha FG830 to the likes of Martin and Gibson, stating how the FG830 holds up to those top brand names of high-end guitars. I myself have played this and other brands, and I can tell you that you won’t find another guitar for the price that plays and looks as well as the FG830.

There’s a lot to consider with the Yamaha FG830 Acoustic Guitar, I know. It’s big, and there may be some work involved in order to play it properly.

If those are deal-breakers for you, you may want to look at other options that are smaller and can be played right out of the box. The best alternative I know of is the Yamaha FS800 Acoustic Guitar, which has a smaller body and thinner neck, making it a great choice for players with smaller arms or hands.

However, if you want a quality, inexpensive guitar with a big, rich, and deep sound, then you won’t need to look anywhere else. With some possible minor tweaks, the Yamaha FG830 has everything you need.

If you are still on the fence, click here to see how this model compares against other models from Yamaha FG8xx guitar series.