There are a few things that can make the difference between the drive to the store being a chore or feeling like a Baby Driver outtake. It’s not always what’s under the hood that matters most though, simple upgrades to the car audio system can elevate the entire experience of driving your car.

In the world of car audio, the first and best value modifications to make to your system, start with the speakers. You just don’t get quite the same effect doing burnouts to Ride the Lightening with crushed mids, paper-thin bass, and a blown-out speaker in the back – you need to hear the full spectrum.

In our quest to find the best value options for improving your car stereo system, we’re doing a Pioneer TS-D69C review, the best 6×9 component speakers for hi-fi enthusiasts that are looking to extend their pristine audio listening beyond just the home. 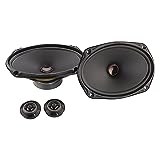 Clarity across the frequency spectrum is the principle feature for these speakers, the tweeter is a 1” soft polyester dome with an inline crossover, and the woofer is a 6” x 9” injection-molded polypropylene cone interlaced with aramid fibers, with two woofers and two tweeters included.

It can handle up to 110 RMS watts (though this came in closer to 80 RMS watts in tests) of continuous power with 330 watts peak power. Speaker sensitivity is on the lower end at 86 dB, so these are best paired with an amplifier to get the most out of them, and the frequency range is a laudable 33-49,000 Hz.

Synonymous with pro audio systems throughout audiophile homes for the last few decades, Pioneer has also been a major player in-car audio from the outset, developing the first component car speakers, allowing for that vital separation of frequencies in high-end systems, and also the first in-car CD player.

As their merger of Pioneer Home Electronics with Onkyo in 2014 shows, their hold on the home AV receiver market has shifted along with the introduction of smart home devices, but their stake in-car audio remains strong. They produce high-end aftermarket speakers, receivers, subwoofers, and amplifiers, as well as OEM (original equipment manufacturer) systems for the likes of Chevrolet, GMC, and Pontiac.

Their development of in-car receivers, compatible with Apple CarPlay and Android Auto undoubtedly is a contributor to their continued prominence in-car audio. Pioneer’s continued innovation of high-quality speakers and materials underlies the company’s other technological endeavors, reliably serving audiophiles in the home and car, and their D-series line of speakers is a continuation of that tradition.

What sets apart D-Series speakers is their accuracy of frequencies, translating into a consistent listening experience across genres and driving surfaces. It’s achieved through blending aramid fibers into the Polypropylene (PP) material that makes up the speaker cone.

PP is a commonly used material in high-end speakers for its high damping capabilities, creating smoother highs and lower distortion. To capture clarity and tightness in the bass, Pioneer has developed their system of interlacing aramid in the PP to create extra rigidity and stiffness, leading to an impressively deep and clear low-end, without the addition of a subwoofer.

Clarity is key when combating road noise, a muddy low-end will be first to get lost in the mix.

In my experience mounting and positioning can be a finicky process for component systems like this. Extra drilling, gluing and lack of positioning options are the last thing you want to worry about when the entire door panel has been removed and you’re installing the tweeter.

The TS-D69C comes with a tri-position mounting kit for the tweeter, the importance of which can’t be discounted. Proper positioning is crucial for the fidelity of the stereo image, and the included swivel mount, which allows for a flush, surface or basket mount, is a simple, yet very effective tool for achieving it.

The tweeters sound great too, very natural highs, and solid peak handling across the system.

Do I Need an Amplifier With this Speaker?

Invariably, the next question after upgrading the speakers in your car system is, do I need an amplifier? Given the low sensitivity of these speakers, the answer will most likely be, yes. Factory in-dash receivers just aren’t going to cut it for getting the best range out of these.

You won’t need to go too crazy though, their continuous power handling at 80 RMS watts, and peak power handling of 360, means only a modest investment is needed, at least in an upgraded head unit, to highlight the speakers’ clarity and prevent cranking the factory receiver to shrill levels on the freeways.

What the Customers Are Saying

A survey of customer reviews pointed to ease of installation and punchy lows as advertised. Overall, there is plenty of enthusiasm for what these speakers offer at this price range.

They rank very highly amongst other 6×9 component speakers, certainly placing them amongst the best speakers on the market. As always, there are some tradeoffs, but the overwhelming number of four and five-star reviews point to expectations being met.

For their size and range, customers have found the low-end to be especially surprising, even without a subwoofer installed. Many point to invest in an amplifier before taking the plunge on a subwoofer, and it’s our opinion as well that you’d be best served maximizing the power the speakers are receiving, before focusing on adding bass.

A large portion of reviews mentioned the ease of installation. This is both due to the swivel mount included with the tweeter, which helps to lock in positionality, and the in-line crossover.

A crossover controls where the frequencies are split, and which ones are sent to the woofer and tweeter. Sometimes they are a separate active box, a smaller passive box, or as with these, little cylinders with RCA connections that are built into the cabling.

It’s great for saving space and easy installation, but as some customers mentioned, cable lengths aren’t always a match from the receiver, and with an in-line system, you’re not able to make frequency adjustments to the crossover, which some have pointed out, make it hard to customize the sound to the car. This, of course, will vary from system to system, and most only had to make a minor adjustment when installing.

There’s no doubt the speakers are an upgrade to any factory system, as customer reports alluded to again and again. After time spent with a thin factory setup, it’s clear that these have revolutionized the listening experience in cars for many drivers.

Here’s a YouTube video that lays out some of the mentioned details:

While not the absolute top of their car speaker range from Pioneer (that would be the Z-Series High-Res audio focused Z-Series) the Pioneer TS-D69C is a perfect option for the sophisticated car audiophile.

Along with the right amp, the addition of these speakers can completely change the sound in the car, a major improvement to any factory speakers you may have been dealing with. You won’t be setting off car alarms rolling down the street with these alone, but they will bring out high-end clarity and punchy lows to whatever you’re listening to.

You’ll maintain consistency on whatever roads you are driving, without danger of getting squelchy highs every time you get on the freeway. Pioneer have been a standard in car audio for decades and they maintain their high standards with these high-end, yet still affordable TS-D69C 6×9 component speakers.

For a higher power handling (600 watts peak power as opposed to the D-Series 330 Watts max) and thump in the bass in a similar price range, check out the flashier TS-6900PRO from the PRO Series.