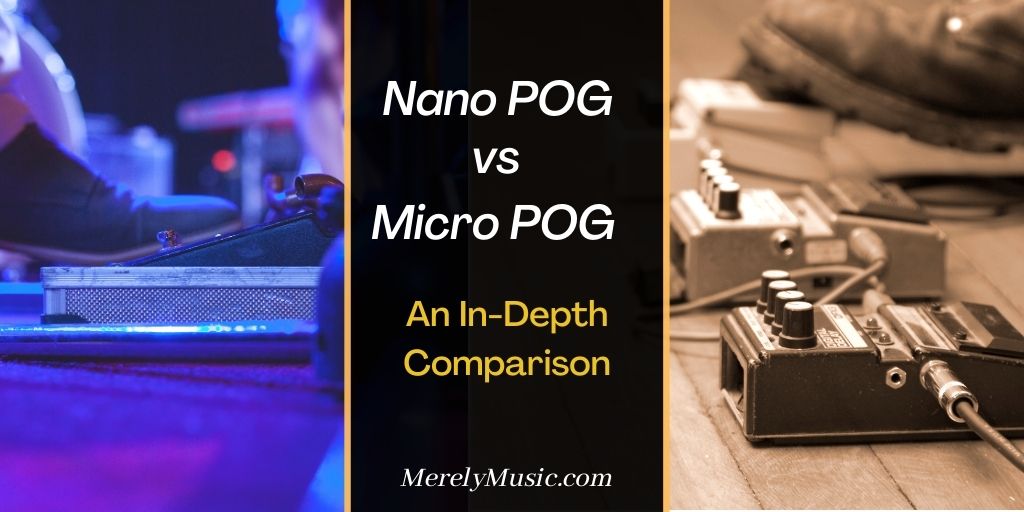 Electric Harmonix is very much in-tune with the people who buy their products. They always have been, and the existence of the Nano POG and Micro POG octave pedals are nothing if not evidence of this. The community, myself included, cried out for a smaller POG and they delivered the Micro POG. That wasn’t small enough for some boards. So along came the Nano POG, its small-but-mighty successor.

AT A GLANCE: Nano POG vs Micro POG

But which should you purchase? You don’t want to get something that’s too big for your board, and you don’t want to sacrifice sound for the size. When comparing the Electro Harmonix Nano POG vs Micro POG, these are valid concerns. Choosing the wrong one can affect your sound or, in the worst-case scenario, force you to reimagine your setup to include a bulkier POG.

Since the release of these POGs, I’ve been seeing community confusion over the difference between them. So that’s what I’m going to tackle here. I’ll take a look at each POG octave pedal separately and tell you what they have in common, as well as examining what they do differently. Let’s get started!

At first glance, these two octave pedals may look to be the same. However, the Nano POG and the micro POG have some key differences that set them apart from each other.

Notably, they are different sizes. The Micro POG is flatter and has a casing more suited to use in a pedalboard. The Nano POG capitalized on that idea and is smaller still. This can make the controls and the footswitch may be more difficult to operate.

Among numerous other small differences, one of the key components that set these pedals apart is the battery compartment. The Micro POG can run on a 9V battery, making it vastly more portable. Since the Nano POG is smaller, there is no room for a battery. It must be plugged in to run. This makes it a little less convenient if you are taking your setup with you.

Here, I’ll take a closer look at the features that each POG pedal offers to help differentiate between them.

Both POG pedals have both dry and effect outputs. This means that there is a dedicated output for the effect (which is what you will chain into), and a dry output (which outputs a buffered version of the input signal). Having both means you have a greater variety of choices when it comes to how your guitar sounds. It also allows you to control the signal that passes down the line to your other effects pedals.

These octave pedals both offer True Bypass, which is great news for you. This feature improves sound fidelity across the board, making sure that the sound that reaches your amp from either of these pedals is not distorted from the original signal. Of course, these (and other) pedals add effects to the sound, but the underlying sound from your guitar will pass through without changing with True Bypass.

The Footswitch allows you to quickly change pedals, alter the sound while you play, and activate special effects as you need them. Each of the EHX POG pedals here has a footswitch for quick switching.

However, the Nano POG has a silent footswitch. This means that the switch itself won’t make a sound when you click it with your foot, allowing for a smoother transition between sounds in the middle of a song.

Which controls can you change with the knobs on the octave pedal? Both the Nano POG and the Micro POG include the following 3 knob controls: Original pitch volume, one octave up, and sub-octave. This allows you to change the pitch fairly easily, as well as adjusting the pitch volume that you’re changing from.

These controls are powerful tools that can help you adjust the sound until you’re happy with it. The ‘Octave Up’ sound boosts your sound to twice the frequency of the input signal, whereas the ‘Sub Octave’ button reduces the frequency to drop the pitch by an octave.

When comparing the Electro Harmonix Nano POG vs Micro POG, this is the one point where they stand apart. The Micro POG can be run either through the power supply (included) or with a 9V battery. This means it is more portable, though of course there is a limit to how long you can use the pedal before changing the battery.

On the other hand, the Nano POG suffers from its small size. There is no battery compartment on this POG guitar pedal. You’ll have to play with it plugged in, which severely limits where you can use it.

Regardless of battery power capabilities, both POG guitar pedals come with power supplies. They come with different power supplies (both are listed in the table above), but the important thing is that they include one. You can plug either POG pedal into an outlet with the rest of your setup to use it indefinitely.

EHX took a cue from their previous pedals and stompboxes with the chassis material here. Where previous pedals may have been less durable, the Nano POG and Micro POG both have die-cast metal chassis to help keep them performing at their best. Both are durable so you can take them everywhere you need your setup without worrying about damaging them.

Knowing how much current your POG guitar pedal needs to work is important to mastering your daisy chains and power setup. The Micro POG may be better for portability, but it also draws more current when you use the adaptor. Using the battery power feature with one 9V battery largely discounts this concern.

On the other hand, the Nano POG only draws about 25mA while it’s working, giving you more room to add more effects pedals to your chains.

How big is the pedal? When you are adding a pedal to your board, the size of the pedal is extremely important.  The Nano POG is smaller, which can be important when you’re trying to save space. A smaller pedal can make the controls and the footswitches more difficult to use, but the compromise may be worth it.

Tracking is an important feature in an octave pedal. Though I’ve listed the types of tracing that the pedal boasts, this is not as important as how fast the tracking is. ‘Tracking’ refers to how quickly the pedal can replicate the notes you’re playing and add the effect on top. Both the Nano POG and the Micro POG feature fast-tracking with extraordinarily little delay.

The Micro POG and the Nano POG have a similar price, and both are in the mid-range where the price is concerned. There is not a huge price difference between them, so you should be free to purchase the one that best fits the way you will use it.

EHX’s Nano POG is easily one of the smallest pedals in their catalog, and the smallest octave pedal. But does this re-packaged Micro POG do enough to set itself apart?

The Nano POG stands up to its larger predecessors, using many of the same features that elevated the Micro POG to its status as one of the best POG pedals out there. When this circuitry is repackaged into a smaller design, there is a slight difference in sound. Some say it sounds clearer, while others say that it is out of tune or has some sort of distortion.

The consensus is that it’s different in some way – whether that’s good or bad may depend on the individual guitarist and the settings they use. It’ll be easy to adjust to your liking because the three-knob design is incredibly simple. Despite this, it’s still able to deliver powerful effects.

The small design is still distinctive, with the bright red POG face front and center. The footswitch is silent, so you won’t be able to hear any audible sound from the switch itself. You’ll be able to tell the difference in your sound, though!

The only drawback to the Nano POG is that it doesn’t run on battery power. The smaller size means that the battery compartment had to be removed, so it has to remain plugged in during use. Thankfully, the power adaptor is included with your purchase, so you won’t have to go through the trouble of finding an adaptor that will work when you play.

The size of this pedal makes it attractive, and it’s largely the same as the Micro POG. If you aren’t concerned with a slightly different sound, this can be the perfect POG pedal for you.

The EHX Micro POG was a response to players who wanted a smaller version of the legendary POG pedal. The Micro is much smaller, less versatile, but it packs the same powerful punch as its predecessor.

Here’s a quick look at the features you can get with the EHX Micro POG.

Technically the Micro POG and the Nano POG have the same wiring and interior design. They are essentially the same pedal when it comes to ability. The small difference is where the Micro POG shines if you don’t mind the slightly larger size.

The Micro POG produces amazing sound, without the slight distortion that the Nano POG offers. It’s easy to use, and the solid construction is as durable as it is attractive. You’ll be able to tell which of your pedals is the Micro POG due to its distinctive red color.

The multiple ways that you can adjust your sound are where the Micro POG shines. All of the best features from the original POG are here to take your sound to the next level. And you can do it on the go! The Micro POG can run on one 9V battery, making it perfect for playing on the go. It’s extremely portable, and therefore perfect for guitarists who don’t mind the bigger size if it means they can take the pedal with them.

The Micro POG is still one of the best octave pedals on the market, mostly because Electro Harmonix knows what they’re doing. Years of experience have condensed into this one pedal, and it’s well worth a try.

Overall, the Nano POG and the Micro POG have minute differences that set them apart from each other. The size and power settings are different, and each will appeal to certain types of players. If you often take your setup with you to performances or different venues, the Micro POG may be for you. It’s bigger but can run on battery power where the Nano POG cannot.

On the other hand, if you want to conserve space on your pedalboard, the Nano POG is the best choice. There is a slight difference in the way it sounds (seen in this comparison video), but it may not be enough of a difference to compromise space.

Outside of these differences and use cases, the Nano POG and the micro POG are functionally the same. Choose based on the slight sound difference or due to portability, but either will work for most players.