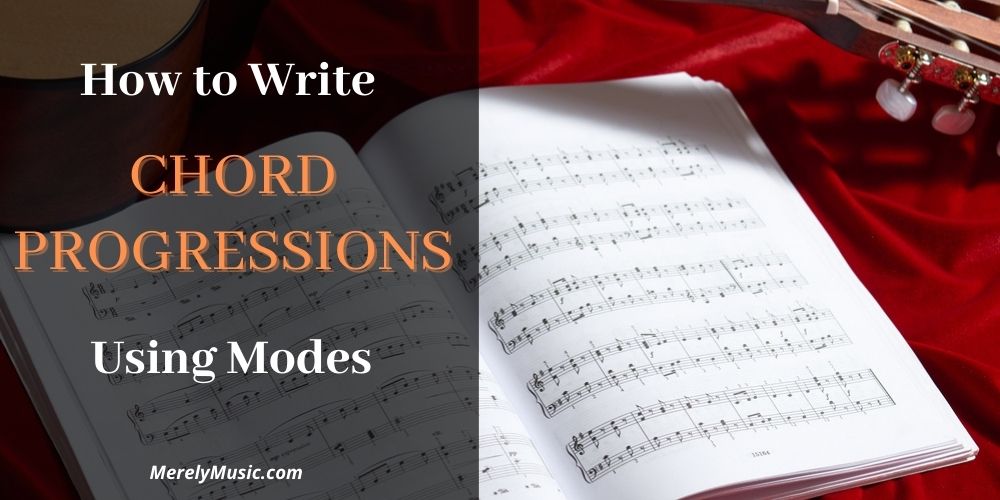 As a guitar teacher, I always get asked questions about songwriting and the general idea of “putting it all together” by guitar players. Many guitars players’ ultimate goal is to be able to freely play and move around the guitar in whatever key they want.

Part of achieving this goal is understanding all the different ways you can use the fretboard.

This is a concept that I have helped countless students with. It’s such a liberating way of breaking out of the usual chord progression methods and seeing your songwriting in a new light. I’m sure you will feel your creativity supercharged by the end of this lesson on modal chord progressions.

Modes are a great way to spice up your chord progression writing. You can simply think of each mode as being an extension of your Major and Minor scales because the major and minor scales are in fact two of the seven modes.

If you’re totally new to chord progression building, then it’s a great idea to start off simple. Modal ideas are a little more complex. Learn the basics of Understanding Chord Progressions here first and then build on it. The basic theory in that lesson will equip you with the tools you need to get through this lesson.

Let’s dive right in and see how you can use this new concept to take your songwriting to the next level.

The Dorian Mode in A is a minor mode that uses the intervals relative to the A Major scale.:

If you apply a chord type on each of these notes you get the following:

The Lydian Mode in A is a major mode that uses the intervals relative to the A Major scale.:

If you apply a chord type on each of these notes you get the following:

How to Use This Information

If you already have a good understanding of how building chord progressions work, then writing with modal scales can be a very simple transition.

Think of it the same way with the mode giving you a template for what chords you can use together in that key center.

Modal chord progressions will give your songs a very unique twist because they take the major or minor scale formula that your ears are accustomed to, and mix it up a little bit with some additional intervals.

For instance, the Lydian mode is a major scale, but instead of playing the 4th chord, which would be a D, this becomes an Augmented (Or Sharp) 4, which is a D#. There is a slightly different musical texture to include this note over a standard D chord.

Once you’ve chosen which mode you want to write with, you can simply string together progressions the way you would with your major and minor scales.

Writing a Progression in Any Mode

As I said, modes are essentially just variations on a major or minor scale. Both the major and minor scales are types of modes.

Here is a list of all 7 modes and their intervals and chord types. The intervals are listed relative to the major scale.


Using this table, if you are to assume that everyone is based on the A Major scale, you’re applying the notes of the A major scale to the first row (Ionian) and then sharpening or flattening each note accordingly before applying the chord types.

It’s worth remembering at this stage that the Major scale is in fact the Ionian mode and the Natural minor scale is the Aeolian mode. Both those scales are modes, and they are often used as the main starting point for anyone learning guitar progressions.

The Sound of Each Mode

When it comes to using modes to write chord progressions you can tap into a range of emotions and feelings. Each mode has a unique set of characteristics that make for a great songwriting template. Here are some ways to visualize each of the 7 modes rooted from an A note:

Between using this table as a reference and the information you’ve learned in this lesson, you’re now well equipped to write chord progressions not only in your usual major or minor formats but in modal formats too.

This is where your creativity gets expanded. Using modal scales for progressions opens a lot of new doors for where you can take a song. As you can see, each mode fits into a specific feeling or mode, so if you have an idea of where you want your song to go, you can use this as a great starting point to get you going.