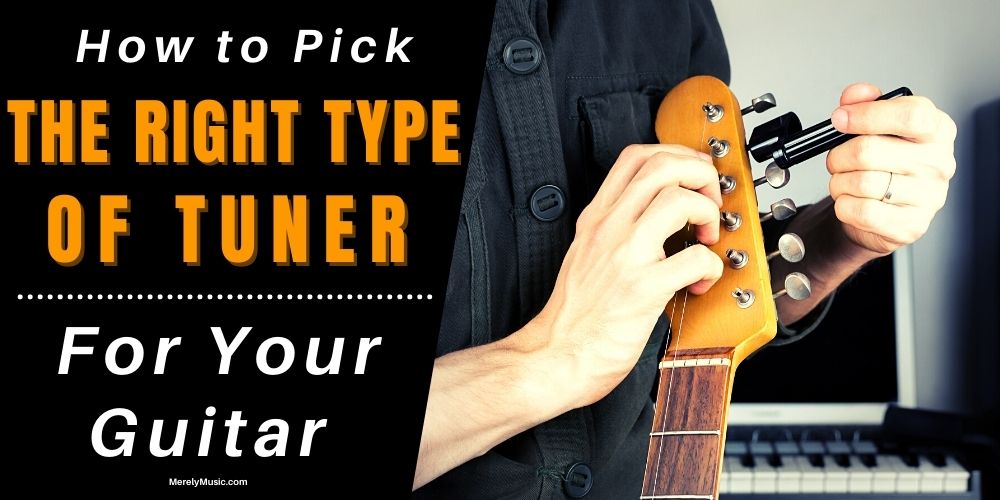 There are many ways to tune your guitar, but certainly, the easiest, and the one you should learn first is just to use a tuner. I usually start with a tuner myself even after decades of playing, and then I bring it even closer with overtone tuning. But that’s complicated as heck for most people.

Let’s stick to simple tuners. Are they all equal? Can you just use anything?

I wish that were true, but it’s not. There are different types of tuners, and some are clearly better than others. In this article, I want to spend some time going over the most common ones, so you don’t make the mistakes I see others keep making. Believe me, this will save a lot of frustration.

By the way, if you are interested in taking your tuning to the next level, Jam Play covers this topic really well.

These are the most common tuners out there, and the most recommended for most instruments. They take up more space and cost a little more, but they are usually the most accurate and give the correct pitch information to a more detailed degree.

Their big downside is that they will pick up other sounds. If you’re tuning backstage or where people are talking or moving around, it may get mixed up.

These ones are super popular with guitar players, and it works really well. They clip right onto your headstock and pick up the pitch through the vibrations in the wood. It won’t get mixed up by other sounds, and it’ll give a pretty accurate read. It doesn’t have as much power for the minute intonation as handheld tuners, but they’re cheaper and pick up only the guitar.

Plus, they can be instantly switched to almost any other instrument and work just about as well.

Pedal tuners hook up to your electric guitar and give you a reading on the pedal itself. It’s perfect for the performing guitarist, but they cost a lot and must be used by the electric guitar (or an acoustic with pickups).

Some guitars use a tuner built right into the body. I’m not a huge fan of these, though they give good readings. They aren’t mixed up by the sound of other instruments, but they do take up space inside the guitar and even block vibrations a bit. This will deaden the sound and richness. Most people won’t notice it, but I do, so I never like these.

This is like a clip-on guitar but it fits in your soundhole. In general, I never recommend these. Yes, it’s really accurate (picks up the sound as it leaves the instrument), but it’s inconvenient to use and somewhat pricier.

Everybody and their brother has an app tuner. A lot of the time, it’s free too.

Use it if you have to. The programs often aren’t good at interpreting the pitch and will only work as well as the microphone on your phone.

These are tuners like the app ones, but now it’s browser-based or off a program on your computer or device. The programs themselves are better than the app ones, and some of them are really good. But again, you’re limited to the accuracy and quality of your microphone.

To cut a long story short, get a clip-on tuner if your guitar doesn’t come with one built-in. They’re affordable, work well, and can be transferred to the ukulele and many other instruments in a snap. Handheld tuners are usually the most accurate, but they will pick up other sounds if you’re somewhere noisy.