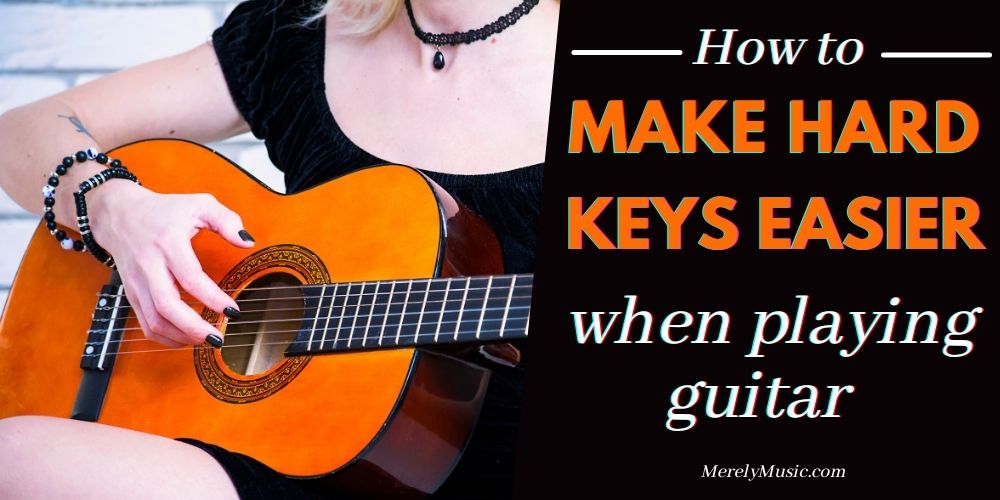 One of the ways you can make hard chords easier by switching them into keys and chords you know well. The major downside of switching the key into an easier one is that the song won’t sound like the original. You can’t play along with the recording because now the pitches are different.

The other method is to use a capo to “raise” the frets to a point where you can use chord shapes you know well while still staying in the original key.

This method may seem better (and I think it is overall), but it requires a bit more of an understanding as to how frets, chords, and pitches work. Still, if you’re willing to give it a shot, you may find that it’ll help you play songs in keys you feel comfortable singing in and playing in.

#1 How Do Frets And Capos Work?

If you haven’t figured it out already, each fret is a half-step or semi-tone. When you press down a fret to chord, you’re moving the pitch of that string up. For example, when you play a G chord, you press down on the third fret of the E string (both at the 1st and 6th string in this case). This moves the pitch up 3 half steps.

The capo works the same way. When put the capo at a specific fret, it moves ALL the strings up that amount of half-steps or semi-tones. Here is a table to help you reference how the half steps work. Note that the sharp “#” and flat “b” notes are interchangeable.

We’ll use this in step #3. But let’s use this a little practically. If you wanted to move the A string to D#, what fret do you push down. Remember, the A string is open, so the first fret would be A#.

You’d press down on the 6th fret.

Now, think about getting the B string to D#.

This is where we actually start to figure it out..

Look at the tonic or home chord of your song. Let’s use the example from last time, E Major – A Major – B7 – E Major. In this case, E is the tonic.

#3 Figuring Out How Many To Raise With The Capo

Let’s assume you know chords in the key of D well.

How many half-steps are needed from D to E? Using the information above, we can find out.

Put the capo at the second fret and move on to the next step.

If you know C well, how many half-steps are there from C to E?

Four! Put the capo at the fourth fret.

#4 Using The Shapes You Know With The Capo On

Once the capo is on, you use the chord shapes of your target key. If you targeted the key of D major and put the capo on the second fret, use those shapes.

The big challenge for some becomes now you need to imagine the capo is the top of the guitar. You do the shapes how you normally would, using the capo as the basis.

If D major is normally fingered:

With the capo, you count up frets from where the capo is.

This method is basically a combination of the first one and using the capo, which is why I recommend starting with the last one first.

Yes, this may sound complicated, and it is, but with practice, you can do it! Resources like Jam Play and their online guitar lessons are a big help too. So don’t forget to check them out.