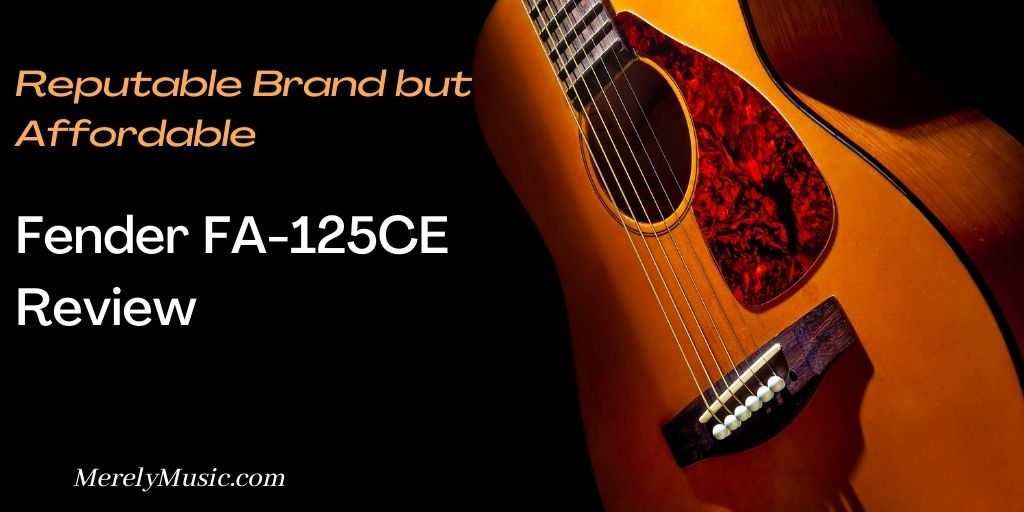 Fender is the name millions of musicians have built their life upon.  From revolutionary electric guitars to starter acoustic guitars, Fender has a line for every level of player.  The Fender FA-125CE is an entry-level acoustic-electric guitar, intended for those who not only want to learn to play, but also want to play shows and record.

I’ve been playing gigs regularly for over 15 years, and while a flashy, expensive guitar may look nice, the most important factor is reliability.  With a guitar like the FA-125CE, you’re making a safe bet that this guitar will withstand whatever you throw its way.

In this Fender FA-125CE Review, we’ll discuss this guitar’s features, what sets it apart from other guitars in the same price range, and whether it’s the right choice for your musical needs.

At first glance, you’ll notice that the Fender FA-125CE looks a bit different than other entry-level guitars.  This is largely due to the cutaway, allowing easier access to the higher frets of the neck (for scorching guitar solos on an acoustic!).  Along with the cutaway, the FA-125CE also features an onboard Fishman preamp and tuner (more on that later).

Fender Guitars was established in 1946 and has virtually never stopped creating and selling quality instruments. With factories in North America and Asia, Fender offers a wide range of guitars that fit any budget.  The Fender FA-125CE is crafted in China.

The Fender FA-125CE is a bit different from other entry level guitars. In the next section, we’ll discuss this guitar’s top features, playability, and the on-board preamp system.

Laminate Construction – Is This Really an Issue?

The Fender FA-125CE features an all laminate construction – laminate spruce top and laminate basswood back and sides.  Laminate is created by stacking individual pieces of wood on top of each other and is more cost-effective than using one solid piece of wood.

For an acoustic-only guitar (no electronics), a laminate top may not be desirable, as solid tops typically have better tone and sound projection. However, with the on-board Fishman preamp, Fender assumes that most will be playing this guitar through an amp or speaker system and that the laminate construction won’t be an issue.

Even though laminate may not sound as lush as solid wood, virtually every acoustic guitar in this price range features some type of laminate construction.  For those who are just learning, or plan to record using the on-board electronics, the Fender FA-125CE will work fine.

Walnut Fretboard – Why Fender Made a Different Choice?

In the past, nearly all acoustic guitar fretboards were made of rosewood.  With rosewood getting more scarce and expensive, guitar manufacturers have turned to other materials.  For the Fender FA-125CE, Fender chose walnut as their fretboard material.  While not as visually appealing or durable as rosewood, walnut is a close second and is hard enough to withstand years of use.  Even famed (and expensive) guitar maker Gibson has turned to walnut from time to time.

Dreadnought style acoustics are by far the most popular, especially in the entry-level price range. Easy to play, full sounding, and loud, every player from Johnny Cash to Jimmy Page has used a dreadnought acoustic to record and play live.

One variation Fender has introduced to the style is the cutaway on the “bottom” side of the guitar.  This cutaway, usually seen on acoustic-electrics, allows for playing chords and single notes higher up on the fretboard.  On a non-cutaway acoustic, it’s extremely difficult to form a chord anywhere above the 12th fret or so.  With the cutaway, your fingerings are less restricted, so try playing an E chord an octave higher – it sounds very nice!

Fishman is one of the premier names in acoustic guitar amplification.  Together with Fender, Fishman has created easy to use electronics to help shape your tone, both live and when recording.

The Fender FA-125CE features a basic Fishman preamp system, with controls for volume, bass, and treble. While those features are quite handy for monitoring your tone, the Fishman tuner is arguably the most helpful tool.  All kinds of solutions exist for tuning your guitar, but having a tuner right at your fingertips is the most manageable and simple.

As a performer, I exclusively use acoustic-electrics, simply for their onboard tuner and ease of setting the sound.  Take a look at your favorite acoustic guitarist – chances are they’ve got their acoustic plugged in, no microphone required.

The Fishman preamp runs on a simple 9v battery, which is located at the input jack.

What Customers are Saying

The Fender FA-125CE is one of the most popular acoustic guitars on the market, especially in the “entry-level” category.  In nearly every aspect, buyers had only high marks for this acoustic-electric guitar.

The FA-125CE is unique in that it attracts first-time guitarists as well as seasoned players.  Reviewers stated that this guitar had a sweet, natural tone, and favorably compared it to much more expensive guitars.

The on-board tuner and electronics were also another stand out feature for reviewers, increasing the range and usability of this guitar over others.

Amongst the reviews, only a few minor and uncommon issues stood out.

Some buyers stated that the 9v battery was difficult to change.  In my experiences, these batteries are somewhat stiff and tightly compacted.  However, you want a snug fit, otherwise, the battery would move and lose connection, resulting in no amplified sound.  That would not be good when you’re rocking out in the middle of a gig!

The bridge, where the strings are held at the bottom, also poses a potential issue. An extremely small percentage of buyers reported a cracked bridge upon arrival, resulting in an unplayable guitar. In these situations, a return is warranted.

Out of all the Fender FA-125CE reviews, these issues are rare.

To get an idea of how the Fender FA-125CE sounds and plays, check out this video.

If you’re looking for additional accessories, like a gig bag or case, the Fender FA-125CE is available in different bundles, as well as in different colors.

Besides the “natural” finish, the Fender FA-125CE is also available in black or sunburst. One bundle deal includes a gig bag, picks, extra strings, a strap, and a trial subscription to the Fender Play Program.  Fender Play is an interactive online lesson service where players can learn songs, chords, guitar techniques, and more.

If you prefer more protection for your new guitar, especially if you’ll be traveling, an FA-125CE hard case bundle is also available.

No matter your level of playing, the Fender FA-125CE deserves attention.  Just having an onboard tuner and electronics really sets it apart from other guitars at this price range, despite its laminate construction.

When tuned to pitch and with a nice set of strings, I believe that even the pickiest player would have a hard time finding fault with the FA-125CE’s materials and tone.

While a lack of a gig-bag or case can seem like an issue, most guitars at this price range don’t include one.

Overall, it’s hard to beat the features and playability of this guitar, combined with its perceived lack of issues.