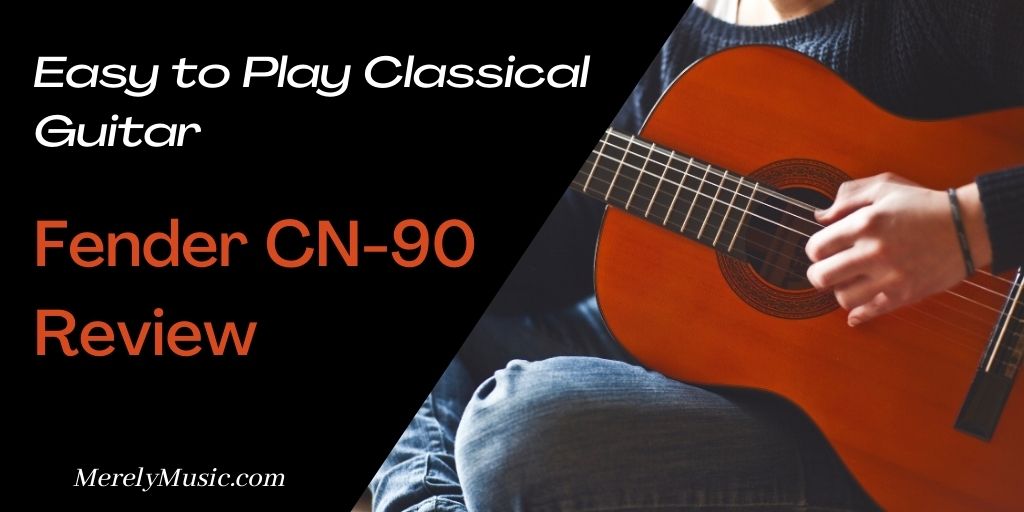 The majority of guitarists were drawn to the instrument by some cultural phenomenon, like Jimi Hendrix, Jonny Greenwood, or Kaki King.  Watching these masters of guitar play can be life-changing, but how do you get to that level? If you’ve never picked up a guitar before, you’ll quickly learn it isn’t as easy as it looks.

Of course, all budding guitarists have to start at the bottom, and the classical nylon guitar is often the first foray into the guitar world.  While not as sexy or sleek as a Gibson Les Paul Custom, a classical guitar offers easy playability, affordability, and a perfect platform for new learners.

Fender, one of the premier names in musical gear, has created the CN-90, an affordable and easy to play classical guitar.  Throughout our Fender CN-90 Guitar Review, we’ll discuss why a classical nylon guitar is a right choice for beginners and whether Fender’s CN-90 is the best place to start.

The Fender CN-90 is a basic classical acoustic guitar that is marketed towards beginners and those looking for an inexpensive “bang around” acoustic.  Created using all laminate wood, the CN-90 is an affordable way to decide whether playing guitar is right for you or your progeny.

Fender’s expansion into classical guitar may be relatively new, but the company has been revolutionizing the music world since 1946.  Nearly all of their acoustic guitars are created in China or Indonesia, but don’t let that deter you.  A vast majority of acoustics are made overseas, which helps keep prices low.

On first glance, the Fender CN-90 may seem like an average nylon classical guitar (but I think that headstock is pretty cool!).

In the following sections, we’ll take a deep dive into how this guitar is built, with a bit of history and information on the woods, construction techniques, and overall fit and feel of a classical guitar.

Laminated wood is the choice of builders when affordability and quality are at the top of the list.  With the Fender CN-90, laminated spruce was used for the top, and laminated mahogany for the back and sides.

Spruce has been used on acoustic guitars and orchestral instruments for hundreds of years.  It is a time-honored wood because of its loud resonance, durability, and overall clear tone.  Its choice as an acoustic guitar top is perfect, especially if you plan to play the CN-90 for a few years.

Like spruce, mahogany is another wood that has been used for centuries, especially in famed Gibson guitars like the Les Paul.  When used as a tonewood in the back and sides, mahogany produces a “scooped” tone, meaning more emphasis on the highs and lows.  Pairing spruce and mahogany is a winning choice, producing a well-rounded acoustic tone.

For first-timers, the neck of a guitar is arguably the most important part.

Most new players won’t be able to hear the difference between a $100 and a $2,000 acoustic, but they will instantly know whether the guitar is hard to play or not.  A big, thick, and unruly neck will quickly derail most learners.

With the Fender CN-90, the neck is slim and slightly shorter than a standard acoustic, making it an excellent choice for new musicians, especially the younger ones.

Acoustic guitars are built using a technique called bracing.  If you look inside the soundhole of a guitar, you’ll see that it isn’t just slabs of wood stuck together – it’s a complex network of long, thin pieces of wood, creating the bracing pattern.

For nearly 200 years, most classical guitars have been built using the “fan” bracing style.  Viewed from the inside, this bracing pattern has the look of a folding hand fan (as seen in depictions of ancient China).  This fan brace provides lightweight structural integrity and also helps amplify the guitar’s bass range. 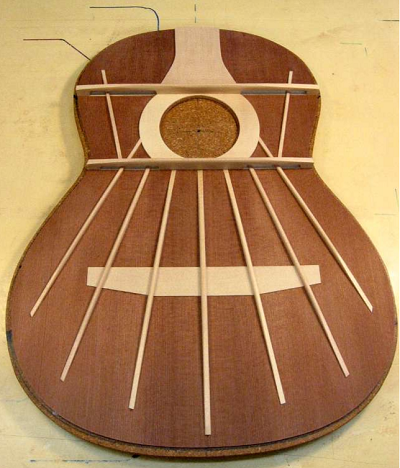 Standard steel string guitars have a way of making your mistakes apparent, while a classical guitar has a soft mellow tone, and mistakes and dead notes aren’t so obvious.  The nylon strings require less effort to push down, and if you accidentally miss a note, the sound is much more forgiving.

What Customers are Saying?

Despite its lower price tag, the Fender CN-90 is built right alongside the company’s more expensive acoustic guitars, and customers across the world have nearly unanimous praise for this classical acoustic.

As often seen in entry-level guitars, most of the buyers are parents of teenagers who are interested in learning.  However, a surprising number of reviewers were experienced guitar players who wanted a new guitar to complement their existing lineup.

One experienced guitarist noted in their Fender CN-90 Review that it played nearly as nice as his more expensive classical guitars and enjoyed the smaller neck.  A parent of a new player stated that her daughter loved the guitar and was playing it constantly.

Relatively few negative reviews exist, and the ones that do cite the factory strings as a problem.  These reviews stated that the original strings had a “cheap” feel and sound, with most changing them out for a higher quality set.  A good idea with any new guitar is to change the strings soon after arrival, as old strings can produce an uneven and rough tone.

Like most classical guitars, the CN-90 has no built-in electronics, but that shouldn’t be a hindrance.

For an in-depth look at the CN-90, check out this video.

As a parent with aspirations to teach my children guitar, I believe that a classical acoustic is the best place to start.  Not only did it work for me, but you’ll also find that most classes encourage classical guitars as for first-time learners.  With that in mind, I feel that Fender CN-90 is a great choice for new players and their fiscally-conscious parents.

While there may be cheaper options out there, the Fender name remains an icon in the guitar world, and the CN-90 is true to the brand’s build philosophy.  This classical acoustic takes the guesswork out of picking the right guitar.

As a few of the reviews noted, buyers may want to have a new pack of strings ready to go.  My personal favorite is D ’Addario Pro-Arte.  Changing strings is just a normal part of playing guitar, so learning that necessary evil early on will pay off later down the road.