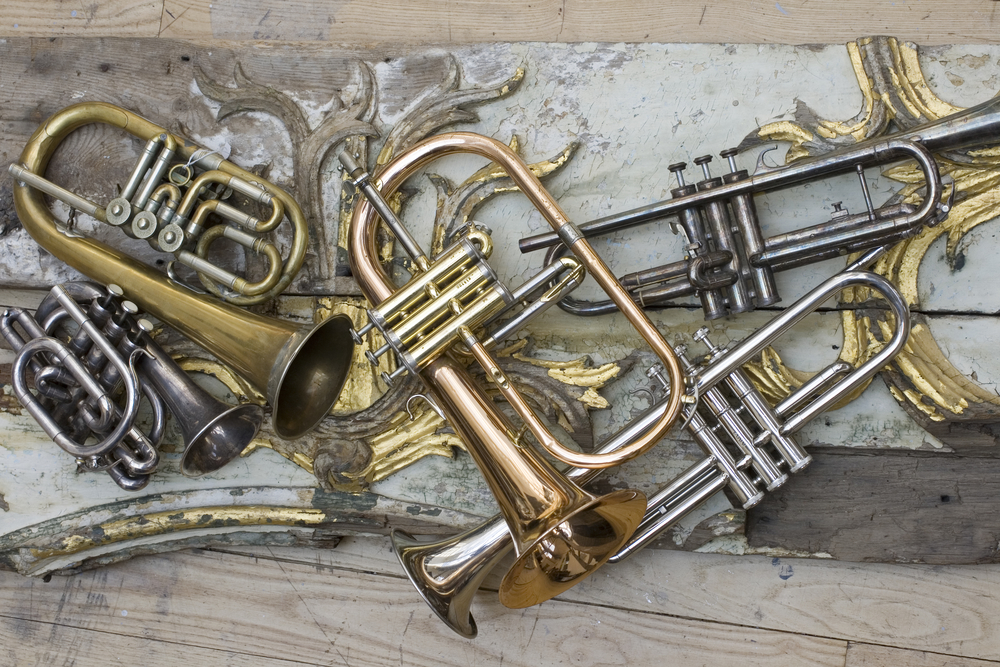 Are you overwhelmed by a large number of types of trumpets out there?

Are you trying to decide which type of trumpet you may want to buy?

I get it! As a music teacher and trumpet player for over 20 years, I understand how hard it can be to navigate the world of trumpets without a guide.

But that’s what this article is for!

In this article, we’ll go over the different types of trumpets including their pros and cons and where they’re most commonly found.

Read on carefully; you don’t want to accidentally buy something you don’t need.

The first way to separate trumpets into different types if by “key.” These trumpets are all played the same, and they have the same internal shape which makes them a true trumpet.

However, the length of the slides is different from each other giving each trumpet a different starting pitch which is referred to as a fundamental.

This fundamental is what gives the trumpet its name (for example, a Bb Trumpet has a fundamental pitch of Bb).

The Bb trumpet is by far the most common type of trumpet. It’s used from the beginner level all the way up to professional level ensembles and is seen in orchestras, bands, jazz groups, and as a solo instrument.

You can’t call yourself a trumpet player if you don’t have a Bb trumpet. Most sheet music in the Western-style is written with the Bb trumpet in mind.

It’s the most commonly used trumpet in jazz and concert band settings.

There are different levels of Bb trumpets from beginner to professional. It can be tricky to sort through them on your own.

Or you can check out our list of the best trumpet brands.

A C trumpet is one centered around the fundamental pitch of C. This makes all of its fingerings one whole step higher than that of the standard Bb trumpet.

As the second most common type of trumpet, the C trumpet is mostly seen in orchestras and some concert band literature.

Orchestra tends to play in key with more sharps in them which makes the C trumpet a bit easier to play in this ensemble.

More important than this is the slightly brighter tone C trumpets have when compared to the Bb. This lets it blend better with the string sound of the orchestra.

Dedicated high school-level players may want to consider investing in a C trumpet. For certain, any serious, advanced or professional player will have a C trumpet.

Eb/D trumpets are much rarer in the world. They are mostly used in very specific orchestra or solo pieces.

The still-higher fundamental pitch makes it even brighter than the C or Bb trumpets. This is highly desirable for solos and in many Baroque and Classical-era trumpet solos.

Eb/D trumpets are called by two different pitches because they can be based on both fundamentals. This trumpet comes with different lengthed slides to alter the pitch to be either Eb or D.

Only at the highest levels of professional play is an Eb/D trumpet required, but advanced players with aspirations of improving and growing may want to purchase one for some experience.

Trumpets based in E, F, or G do exist and are called for in some pieces for orchestra.

However, unless it’s a top 10 orchestra, the orchestra won’t likely have the trumpets play those. Most likely, they’ll either just play it from a C part or they may borrow the trumpets from a nearby university.

These are neat, but not needed to have in your library unless you really want to.

Besides trumpets of different keys, there are “specialty” trumpets. These can be found all over the place in the music world.

These wouldn’t be the type of trumpet you would want to have as your main horn, but they can be fun and useful in all sorts of situations.

The piccolo trumpet is one that was hugely popular back in the Baroque era of music (around 300 years ago), but it remains relevant today.

A piccolo trumpet is a Bb trumpet but pitched one octave higher than the standard Bb trumpet. This means it’s the smallest and plays much higher than your standard trumpet.

With a higher pitch, the piccolo trumpet has a very bright and “punchy” which is why you find it playing a lot of solo and flashy parts.

Its biggest use is in Baroque-era solos and orchestra pieces, but it’s also called for in higher level modern orchestra, concert band, brass band, and solo works.

The most famous piccolo trumpet part of the modern age is the trumpet solo from the Beatles song, Penny Lane. Take a listen to this video for an idea of its sound.

A Bb pocket trumpet is in the exact same key and fundamental as the standard Bb trumpet; the tubing’s just been wound more tightly than normal.

What this tighter winding does is drastically reduce the trumpet’s overall size. In some cases, companies suggest that it could even fit in your pocket which is where the name comes from.

In my experience, you still need a pretty big pocket to do this, but its small size makes its very portable. This is great for packing it on vacation or anywhere you need to travel light.

The pocket trumpet isn’t recommended for use as a serious instrument, but it will do just fine in a pinch. It’s more of a fun thing to take with you.

Because of its compact size, the pocket trumpet loses some resonance in the brass. The vibrations just end up too close.

This makes the pocket trumpet have less potential for volume and richer sound. It just can’t get as loud or sound as good when compared with the standard Bb.

The Ptrumpet or any of its fellow plastic variations are a sensitive topic with band teachers and professional trumpet players.

This specialty type refers to Bb trumpets (or C trumpets rarely) made out of plastic.

These groups often dislike (or even hate, some will say) the plastic trumpets because of the sound quality.

And, to a certain extent, I agree.

The plastic trumpets will never measure up to an actual trumpet made of brass. Plastic can’t vibrate well and manipulate sound the way brass does which is why we’ve used brass for centuries in our trumpets.

Not to mention, they come in different colors which are a lot of fun.

My recommendation when it comes to plastic trumpets is this:

Don’t have this be your only horn, but if you want one for fun and for playing in outdoor venues, go for it!

And, you know, in the right lips it can still sound amazing (like in this video).

Rotary trumpets are the same as standard trumpets but instead of a piston (or button) valve system, they use something called rotors (or paddles).

These rotors (most commonly seen on French Horns) are known for being very accurate and reliable. They often require a lot less cleaning.

However, they can be a bit slower and make a small clicking sound when used. On the fast-playing trumpet, this isn’t ideal, so they aren’t seen as much.

The only places in the world which commonly use rotary trumpets are in German countries in their orchestras.

Trumpets are defined by their higher range, mouthpiece, bore size, valves, and cylindrical bore. If some of these elements are in place while others are changed, you get one of the trumpet’s cousins.

These instruments play extremely similar to the standard trumpet, but their difference results in different timbre or quality of sound. Check out these trumpet cousins.

Note: A cylindrical bore is one where the tubing diameter stays the same until it flares out at the bell.

Check out more on the anatomy of a trumpet.

The cornet is exactly the same in all the important areas on the trumpet except that it uses a conical bore instead of one shaped like a cylinder.

A conical bore is one where the diameter of the tubing starts small and widens gradually until it flares at the bell.

This difference in bore shape makes a cornet have a darker and, some would say, richer sound.

Cornets have lost some of their popularity over the years, but they can be played for all the same things a Bb trumpet can up to advance ensembles.

At the higher levels, musicians get pickier about the sound which is where the cornets falls out. However, it is still used in some concert band literature, in some marching groups, and is extremely important in British style brass bands (fairly common in the U.S. as well).

Read our article on Cornet Vs. Trumpet for more detailed information.

Check out this cornet solo in a brass band.

The flugelhorn is played the exact same as the standard Bb trumpet. It uses the same valves and even bore shape.

But the instruments small bore size and larger mouthpiece give it unique overtones.

Note: Overtones refer to the harmonic frequencies which vibrate more strongly when playing. When we talk about richer or darker sounds, there are many frequencies vibrating along. A brighter sound sticks to more specific and higher frequencies.

The flugelhorn sounds powerful and rich in the high and lows of overtones which allows it to play bass and soprano songs well.

The flugelhorn is light and easy to pick up and play. This makes it the most popular as a jazz trumpet. It’s also used in some solo pieces in band literature.

Many professional and advanced players own one, but if you’re a good high school player who wants to try one out, many band programs have one for special use.

Have a listen to a jazz Flugel solo.

The bugle is the earliest form of the trumpet. The main difference between the bugle and the trumpet are its lack of valves.

Without a valve system, the bugles could only play a few pitches based on the overtone series.

For example, a Bb bugle could play:

Once we started adding valves to channel air down different length of slides, all the pitches became available at one time.

Bugles are still around today when playing period solos from the Renaissance and early Baroque periods, but they have become most associated with military functions or military-style marching bands.

The most often heard bugle call is “Taps” which is played at funerals and memorial services for veterans.

You may also recognize this call, Reveille, or wake-up call.

All the different types of trumpets can be a lot to sort through, but hopefully, this guide can help you get started.

Make sure you read carefully or you may accidentally buy something you may never need.

If you’re looking into trumpets or you already have one, make sure you know all about trumpet care and maintenance.

Article Name
Different Types of Trumpets to Choose From: Which is Best for You?
Author
Sam