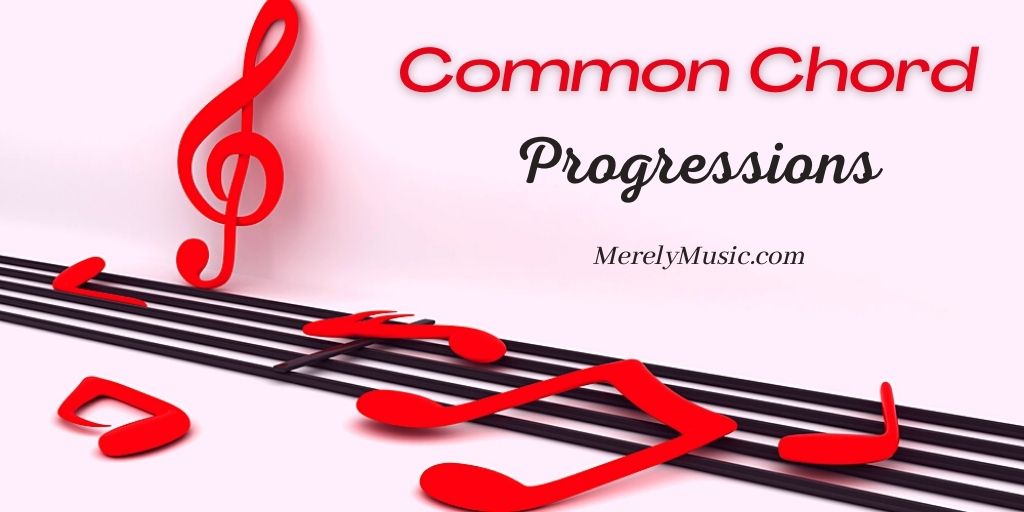 Once you get to grips with the basics of how chord progressions work and how you can start to build them in any key, you can start having some real fun.

I find that being able to hook a theory concept into something you already have a familiarity with, such as a song you know, is a great way to see the theory at work.

In this lesson, that’s exactly what we’re going to go through. We’re going to take a bunch of genres and typical genre-specific progressions and look at what common patterns you can expect to see in each type.

The rules in this lesson apply to every genre imaginable. Each genre will have a set of characteristics that give it a unique sound. By the end of this, you should be armed with the knowledge to spot these trends in whatever genre you decide to learn.

All the examples in this lesson will be written in the key of A Major or A Minor. If you are new to chord progressions and want to explore how each key works, you can check out these three great guides to building chord progressions:

Lo-fi music is often based around fairly simple progressions that are rooted in a jazz influence. While the genre as a whole may not sound like jazz, it takes a lot of its structural elements from jazz music.

A common progression in Lo-fi would be a 1 6 2 5 progression. In the key of A this gives us the chords:

A progression like this is great for jazz-based Lo-fi electronic music or hip-hop. The addition of the two minor chords gives the progression an interesting feel. Even though it’s a major progression, there is a heavy minor leaning.

The 1 5 6 4 chord progression is a very common one. You’ll find it most of the time in ballad style songs. If you’re looking to write a pop song or a ballad then this progression is a fantastic starting point.

It’s been used in hits such as Toto – Africa and John Legend – All of Me.

While the examples in this lesson are all in A Major, you can work this just as well in a minor key. This gives you the chords A, E, F#m, and D in the key of A Major.

Hip hop typically works better in a minor key rather than a major key, but you can apply the same principles. If you take the 1 and 5 chords from your major key and turn them into minor notes, this gives you A minor and E minor. This is a great hip-hop progression.

Hip hop should be kept simple and minimal with plenty of room for the vocals to shine. A simple Am to Em works great.

The Harmonic Minor scale does require a little additional theory knowledge to tackle. Think of this as an alteration to your standard Natural Minor Scale

Starting with the A Natural Minor Scale, you have:

To turn this into a Harmonic minor you first need to sharpen the G, giving you the notes A, B, C, D, E, F, G#.

To create a Harmonic Minor flavor with your playing, you also need to change certain chord types over certain intervals as follows:

The Diminished and Augmented chords in this grouping won’t work too well in conventional pop or rock music due to their slightly dissonant feel, but if you’re applying this scale grouping to jazz it works great.

You could use the Harmonic Minor to play a typical jazz 2 5 1 which is a Bdim, Em and A chord:

Or you could carefully use the C Augmented chord to walk between the 1 and 4 chords which gives you an alternating bar of A to D with a Caug at the end of each bar walking between the two main chords:

A lot of RnB draws influence from soul as well as jazz so you can add a lot of these elements into your RnB playing.

When it comes to building RnB progressions, you can start very simply with a 1 4 5 3 progression. The 1 4 5 part is something we instantly hook onto. It’s used in blues. rock, pop, and most popular genres. The 3 chord in this is a minor chord, this is where it becomes interesting.

The 1 4 and 5 chords all resolve into each other for a pleasing change, after the 5, you’d expect to land back on the 1 to bring the progression back around, but hitting the minor chord on the 3 creates a slight tension before resolving back on the 1 in the next loop.

If you want to dig even deeper into advanced RnB progressions, you can start using chord extensions.

Using maj7 chords and min9 chords over this progression will add further harmonic complexity to the sound of the chords.

Jazz, in either a Major or a Minor key, is often found as a 2 5 1 progression. In major keys, this is an interesting progression because you start on the 2 chord which is a minor chord. It instantly gives the track a minor feel, but you’re then resolving the 5 chords back to the 1.

The movement from the 1 to the 2 at the change of bar creates a slight tension between each bar which is perfect for some interesting Jazz textures.

In the key of A Major, this would give you the chords Bm, E, and A.

In the case of A Major, this is the 6th chord which is F#m.

Your progression is going to be 6, 3, 4, 3 but in a major key, the 3 is typically a minor chord. For a Spanish flavor this needs to be swapped for a major chord.

The newly reassigned Major 3 chord to the 4 chord is known as the Andalucian cadence which is a common chord change in Spanish rooted music.

Even though you’re changing a previously minor chord for a major chord, and you’re rooting it from a minor chord to start, the progression still retains a major feel.

The term diatonic simply means within a key. This means, as long as you are pairing up chords to create a progression that is all from the same parent key, it counts as diatonic.

Those articles both contain a bunch of common progressions in major and minor keys that are diatonic to that key. Here are a few examples:

All these progressions are considered diatonic because they all come from their parent key.

The 1 6 4 5 progression is a soulful ballad classic. Everything from the Ben E King hit Stand by Me to Whitney Houston’s I Will Always Love You. These massive singalong songs are all based on this progression.

The 1 6 4 5 works really well for ballads because you have the 1 chord giving you the key, the 6 chord being a minor chord gift the progression a little shift, then the 4 and 5 chords bring it back around to resolve to the 1 in a pleasing way.

Try It Out Yourself

The great thing with all of these progressions is that, although they’re linked to a key here, they work in any key. Chord progressions are a concept that you can apply any way you see fit. You can play the major progressions in minor and the other way around too.

It’s all part of experimentation and creativity. Having an idea of a progression is a great place to start writing a song, but where you take it from there is only limited by your own imagination.