I’ve bought over a dozen guitars and basses in my two decades as a musician, and it’s always an arduous process. Should you get something mainstream like a Martin or a Taylor, or should you go with something from a boutique luthier? What tonewood sounds the best for your style of play? Which acoustic guitar will stand up best to the stress of temperature and humidity? And possibly the most important factor, price – what’s the Best Acoustic Guitar Under $1000?

Usually, you’ll narrow your choices down to a handful of instruments before watching hours of videos and reading thousands of words on the internet. This is probably the step you’re at, and you ended up here because you’re considering a Breedlove Solo Concert acoustic guitar. 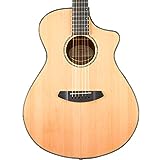 The Breedlove Solo Concert is a sturdy, well-made acoustic guitar built in Breedlove’s Bend, Oregon shop. It’s a great guitar for any intermediate to advanced players who primarily finger-pick and need a workhorse instrument to serve as their main acoustic either on-stage or in the studio.

The Breedlove Solo Concert’s Western Cedar top gives it a warm, full tone akin to a Martin, making it a great selection for finger-style pluckers and chord-strummers alike. The sides and fingerboard are all rosewood, the industry standard for both acoustic and electric players, and the neck is made of mahogany. It’s a great choice for anyone who needs a full-bodied tone, like folk musicians, rhythm guitarists, acoustic rockers, or singer-songwriters.

The Solo Concert is made at Breedlove’s luthier shop in Bend, Oregon. Breedlove does make some guitars overseas in Korea and China, but the Solo Concert series is made in the U.S.A. American-made guitars are generally higher-quality than their overseas counterparts, but also usually cost more. You get what you pay for though – I’ve bought both American- an overseas-made guitars and basses, and the American-made instruments can make their foreign counterparts feel like toys in comparison.

The acoustic guitar’s single cutaway allows a player to have easier access to notes higher up on the neck. This gives it a playability found more often with electric guitars, and will open the door for you melt some faces with a solo. Whenever I have the option, I always go for the acoustic guitar with a single cutaway.

Played by the Pros

An often-overlooked factor when deciding which acoustic guitar to buy is who else is playing one. If you like the way a player sounds, you can generally approximate their own tone if you get the same gear. A number of big-name acoustic guitar players use Breedlove guitars, including Nick Hexum from 311, Jim James of My Morning Jacket fame, and Ed Roland of Collective Soul.

One of the biggest threats to any acoustic guitar is climate change. We’re not talking about icebergs or ocean levels here – I’ve had friends on tour play gigs in New Orleans one night and fly to Denver for a gig the next night, only to find that their acoustic has cracked or broken due to the change in humidity.

As far as durability goes, one owner tells about how he traveled across the world with his Solo Concert over seven years, from Southern California to India, and that it had just begun to show wear. This tells you all you need to know about the instrument’s durability. If you’re a world-touring musician, the guitar will last you for the better part of a decade. If you mainly stay in the same area (or keep the guitar in your studio), it’ll probably last a lifetime.

There are a couple of issues with the guitar, though. Its 42-inch length means that it may not fit into some guitar cases, so make sure you bust out that measuring tape before you buy the guitar. The Solo Concert’s headstock is also too skinny to clip a capo onto, meaning that if you use a capo, you’ll have to attach it to something else, like a mic stand. And its thick tone and low action make it difficult for inexperienced or new guitarists to play the instrument – some practice may be required before you can shred on this guitar.

After sifting through information on reviewers’ and retailers’ sites, it’s pretty clear that consumers love the Solo Concert. Some musicians have compared the Solo Concert favorably to industry titans like Martin and Taylor, and one said that it’s the best guitar he’s played in 46 years. One reviewer on Youtube mentions its warm tone as one of the guitar’s trademark features.

The Breedlove Solo Concert acoustic guitar is a durable, tough workhorse that can do any job you need it to. It’s is a great choice for anyone who needs a warm, full tone while playing folk or acoustic-influenced rock music, and it’s also a top-tier guitar for singer-songwriters. Fingerpickers will find the guitar especially well-suited to their needs, as the warm tone gives a fuller body to their playing than many other acoustic guitars.

Check out his video and see if you like the sound that Breedlove Solo has to offer:

If you think you’re looking for something different, make sure you check out Taylor acoustic guitars. They’re generally brighter and more up-front than the warm, subtler tones of a Breedlove.