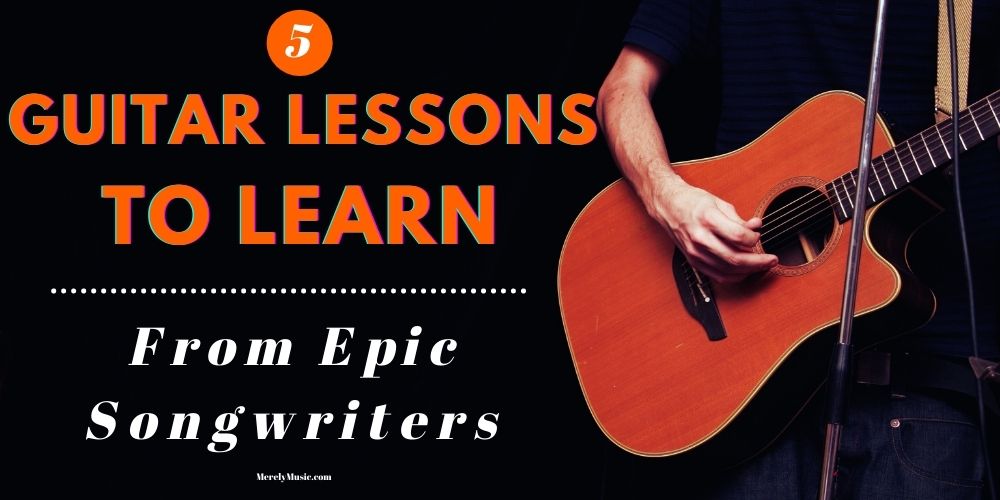 Songwriting and making up songs with the guitar is something almost every single guitar player gets into once they’ve reached a decent level of skill on the guitar. It’s a natural extension to learning to play all those awesome songs.

With this in mind, I decided to look around and ask my songwriting friends for their biggest pieces of advice, and these were the five they came up with.

Speaking of songwriting, I love Jam Play’s songwriting lessons on guitar. They cover enough of the artful and the music theory side of composing to set you up for the best success.

#1 Keep A Key Idea To Guide You

Songwriting gets messy. It’s a vicious cycle. You get on a roll with your song, adding and adding until it sounds good to you. Then, you’ll look back and see a lot of excess junk holding it down.

If you keep the key idea of a song in mind, you’ll be able to better determine what adds to the idea and what distracts from it or doesn’t match. The key ideas will guide you and help you make your song better.

Song ideas don’t have to be based on lyrics, but they can be. Many great songs were started with a melody, a chord progression, a drum beat, or a bass line. It can be anything.

Every great song that has stood out throughout history has done something to connect with our emotions. The writers accessed that feeling and shared it through their music. Whether it was the haunting of the Sound of Silence or the happy-go-lucky party of Pontoon. Connect with the emotions and get real. Sincerity does come across in the music.

It’s tough when you pour your heart into creating a song. If you share it and someone doesn’t like it, you feel invalidated and betrayed by your own “lack of talent.”

But it’s necessary. Other people see your music from a fresh perspective, and even if they aren’t musicians, you’ll get feedback on what’s working and what’s not.

It’s hard, but try to look past the emotional pain of the critique to hear what’s not working. If they say it’s boring, you don’t have enough variety. If it sounds fake, you aren’t being sincere enough or real enough with your lyrics.

#4 Say Lyrics Without Singing/Playing Them

Speaking of lyrics, take the guitar and singing away and just read them. They should almost sound like a poem, and they should always make sense. Removing the music really exposes the strength (or weakness) of the words.

#5 Have A Clear Purpose

Don’t just write a song to write a song. Have a reason to. Have a goal for getting the music out there based on the song itself.

It doesn’t always have to be deep or meaningful, but you need to be able to say what it is clearly. This song is about…

Here are some examples: